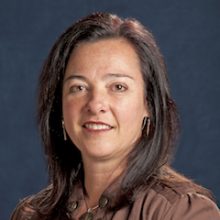 Sylvie Bouchard graduated in pharmacy at Laval University in Quebec. She also holds a diploma and a master’s degree in hospital pharmacy as well as an MBA in business management, obtained at the same university. In 2017, the Ordre des pharmaciens du Québec awarded her the Louis-Hébert Prize, the highest distinction for the recognition of excellence in her professional achievements, throughout her career.

Ms. Bouchard worked as a pharmacist in the health care facility and as a hospital pharmacy manager, first at the hospital affiliated university center of Quebec (CHAUQ) and the Hôtel-Dieu de Québec Center hospitalier universitaire de Québec ( CHUQ). She has worked in several clinical areas, with a marked interest in intensive care practice. In addition, it implemented robotization and drug distribution technologies at CHAUQ in 2001.

She joined the Medicines Council in April 2010, which became the National Institute of Excellence in Health and Social Services (INESSS) in 2011, and assumed several managerial roles. Ms. Bouchard held the position of Director drug as of April 2016. She is now director of drug evaluation and technology for purposes of reimbursement.

All Sessions by Sylvie Bouchard

In early summer 2021, INESSS announced a change in their guidelines for listing applications. Investigate how these revisions could potentially be picked up throughout the rest of the country, and arm your team with the knowledge to prepare for potential changes by: